Just get in the car…I’ll explain on the way…

It has been a bit…I mean…it’s been an entire year and I have been MIA and for that, I apologize. Life was a bit more insane this year than expected. I have no excuses from Jan- July of last year. We were and STILL are working on some big stuff, it just got put on hold. Let me fill you in…

I was in a major accident on July 13th, for those of you who did not know. I was working on a custom ouija board at TechShop and wanted to add a finishing touch on the planchette by running it on the belt sander really fast. 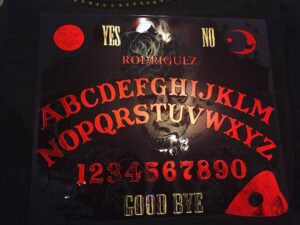 it came out great…

The belt sander drop plate was set too far away from the belt (should be 1/16″ and it was more like 1″). I didn’t notice or know to look for that detail. When I was running my piece through the brand new belt grabbed the piece and sucked it into the machine. It happened so fast that I didn’t even have time to pull my right hand away or off the piece. My hand became trapped in between the belt and the planchette….with the machine running. YES- the sanding belt started to sand OFF my fingers. The machines seized after about 2 seconds which doesn’t seem 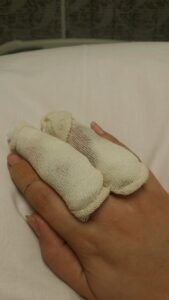 like a lot of time. Let me remind you that it was a brand new 80 grit belt… Two seconds was enough time for the sandpaper to grind away the upper half of my right middle finger and right ring finger from the tip to the middle knuckle. It ate through ligaments and tendons. I turned the machine off as soon as I could comprehend what was happening but my hand was now stuck in the machine. I had to wait for another worker to come remove my hand. I took one look and shock shot through my entire body and I calmly said:
“I need to go to the hospital…”

After being denied at Urgent Care as well as the Emergency where they thought they might have to amputate my two fingers…(I wasn’t having any of that talk…I threatened to walk out. ) I was taken to Chandler General where they told me I would instead need skin graphs from my upper thigh to make up for all of the lost tissue. I was so lucky to have one of Arizona’s BEST plastic hand surgeons available to work on me. I received reconstructive hand surgery the very next morning and incredibly enough I did not need skin graphs. The surgeon was able to save my fingers and even found in the mess of mushy tissue my quick lines (what grows your nails). He was able to reimplant my quick lines on the tops of my new fingers but it was no guarantee that my fingers would regrow nails. 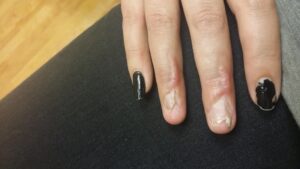 I was out of work for a while.. until mid August while I healed and had the risk of Infection go away. I started physical therapy 3 times a week every week, and have to see the surgeon once a month where I usually get cut into or have had pieces of new nails (YES They are growing now!! =D) removed because they weren’t growing in correctly. Workman’s comp covered all of the costs because the prototype I was making was a file I was testing for a product to do Make and Takes with at TechShop. This was very good news because the surgery was 116k…that is almost as much as my house…I don’t know what I would do if I had to pay that. The entire experience has been the most painful thing that has ever happened to me. The worst part about recovery has been that I use my right hand to do everything…Because the tendons and ligaments are now shorter my grip is no good. I can’t make a full fist. I have had to work my ass off to try to hold anything over 2lbs or anything smaller than 1″ across (pens, seam ripper etc) It’s the simple things that you take for granted like opening a Jar, or picking up a laundry basket. You forget how strong your hands really are till you cant use them. When I do therapy they have to heat my hand up and about an hour into working it I can now get my fingertips to touch my palm and kinda make a fist. The amazing thing about it all is you can’t even tell that the injury was that bad..it looks like I got some scrapes and have some slight scarring. You would have never of guessed that the tops of my fingers were two giant 3″ gaping holes. I won’t show you what they looked like because it was really …not awesome. The amount of blood that came out of them was very surprising.

I was back to work from Mid Aug until Nov 13th (welcome to the holiday season) when I was told along with all TechShop staff that the company had to shut its doors at all locations. We were all laid off just in time for our shops 4 year Anniversary. All of the staff came into work even though we knew that we wouldn’t get paid and we helped as many members as possible get their items out before the doors had to close at 4 pm. Everyone including members were given less than 24 hours notice. The company did everyone wrong and it was very upsetting but there is nothing we could have done to save it. Here is a video I took showing the last moments of the doors being open before being closed indefinitely….makes me cry watching it. I learned a lot of amazing new skills and achieved things that I never thought possible at this place…many people did but now it’s gone. I worked there for 4 years straight from the moment to doors opened to the moment the doors closed. There are talks of a TechShop 2.0 that maybe resurfacing but nothing more than talk has happened yet. I am sure there are layers and layers of the legal mess that has to be sorted through before it really could be brought back to life. 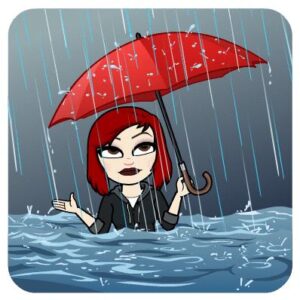 To make things even worse a few days before Xmas the Timing Chain on my car’s engine snapped and destroyed a bunch of crap under the hood. Mind you…I have only owned this car for 2 years. I paid 16k for it and LUCKILY had just paid it off 1 month prior. My wonderful husband’s father is a Master Mechanic and has it currently to see if he can fix it. When the car was taken to the dealership’s shop I was told to buy a new car…wtf…so….lets review. HURT + JOBLESS + CARLESS = #MeIRL.

The upside of all of this is that I should be done with therapy the first week of Feb, which will clear up my work availability and this will increase my chance of being hired. The expected completion date on my car is about the same time so I will actually be able to get back and forth from interviews. I have pending approval to join FABRIC in Tempe once my Doctor clears me but don’t really want to say anything more because I don’t want to jinx it. It would be my first pick of places I would actually enjoy working. 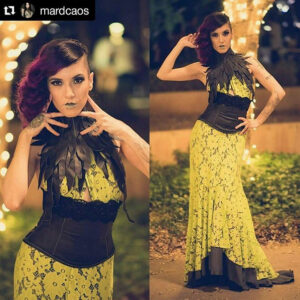 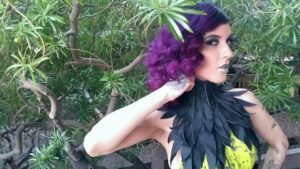 FABRIC put on a runway show a bit ago that I participated in by creating 1 look. It was extremely difficult for me and took me about 10 times longer to create due to my injury but I got it done…man did my hand HURT afterward. I tried to do something easy and it still took forever. It was a chartreuse knit with a stone grey silk under-dress and train. I made matching collar and corset in black soft leather (putting in the grommets almost killed me). I don’t like to think of the fact that my sewing times have been greatly altered due to this injury which means that it will affect me for life…There is no guarantee that it will get better as time goes on but let’s hope that it does. I have been practicing sewing since the accident so I guess I just need to relearn a lot of ways to work around my injury. 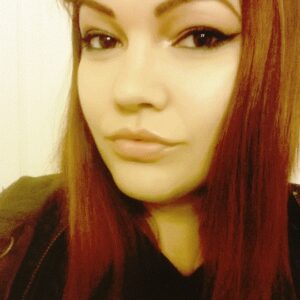 Other than that the only thing I have really been doing is working on myself which is always pretty hard to do. I was overweight to the point of being borderline obese so I decided to lead a healthier lifestyle. I have been eating better, trying to sleep and not be stressed (HA!) as well as trying to work out at least 3 times a week. I have lost 30lbs so far since last year. So far so good but it is something that I will need to stay on top of. I am looking to go down another 30lbs if I can, because I am still considered overweight. I just want to be healthy and have some muscle!! With my best friend and show boothmate having moved to New Mexico (Booooooo!!) I will have to run my shows solo. My BFF will be back for major shows like Mad Monster and PCC but everything else is all me. I am ok with it but it is a lot of work, especially with only 1 good hand. 2018 is going to be challenging but there is no way it can be worse than last year right?……right guys?….guys!? I am trying to push myself harder….I can’t let another year slip by with no progress so this is what I have coming up.

I am going to set a reminder on my phone to post monthly!!! Even if it is a silly check-in or funny meme. Thanks for sticking around and I promise there will be much more activity this year….We will get back on track and get you guys some awesome new shit. PROOOMIIISE!!